Showing posts from September, 2012
Show all

September 28, 2012
Today’s links: torture, technowar, and talking points. New York Times : Election to Decide Future Interrogation Methods in Terrorism Cases (by Charlie Savage) Key passage: “In one of his first acts, President Obama issued an executive order restricting interrogators to a list of nonabusive tactics approved in the Army Field Manual. Even as he embraced a hawkish approach to other counterterrorism issues — like drone strikes, military commissions, indefinite detention and the Patriot Act — Mr. Obama has stuck to that strict no-torture policy. By contrast, Mr. Romney’s advisers have privately urged him to “rescind and replace President Obama’s executive order” and permit secret “enhanced interrogation techniques against high-value detainees that are safe, legal and effective in generating intelligence to save American lives,” according to an internal Romney campaign memorandum.” New York Times : Cyberwarfare Emerges From Shadows for Public Discussion by U.S. Officials
Post a Comment
Read more

September 26, 2012
From China to Ohio to campaign spending data… New York Times : Obama’s Journey to Tougher Tack on a Rising China (by Mark Landler) Key passage: “To some extent, Mr. Obama’s learning curve on China parallels his early outreach to Iran: an initial hope that old adversaries could put aside their differences, followed by a jolting recognition of reality and the ultimate adoption of a realpolitik approach. The difference, officials argue, is that in this case the tougher line has led not to stalemate but to a constructive give-and-take with a country bound to rub up against the United States.” Washington Post : How the presidential campaigns are spending money, in one chart (by Sean Sullivan) Click on the link and check out the chart! Here’s a cool fact from the data: “Interestingly, Romney and his allies have dedicated about $29 million more to mail than Obama’s side, dishing out nearly $100 million. Direct mail is a much more targeted medium that leaves room for tailoring
1 comment
Read more 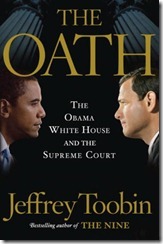 Yesterday I shared my first set of political news links. Today, I’m also recommending a few books about politics, legislation, and government. All of these authors have well-established reputations for being astute observers of the political process. If you want to go beyond the short-term focus of the news cycle and look at broader political themes, these look like four of the best recently-released (and in one case, soon-to-be-released) books you can buy. The Oath: The Obama White House and the Supreme Court (by Jeffrey Toobin) The New New Deal: The Hidden Story of Change in the Obama Era (by Michael Grunwald) The Price of Politics (by Bob Woodward) The Signal and the Noise: Why So Many Predictions Fail – But Some Don't (by Nate Silver)
Post a Comment
Read more

September 25, 2012
I tweet a lot. Like, a lot. And recently, most of my tweets have been about the 2012 presidential election here in the United States. Ever since the Republican primary, I’ve read countless interesting news articles about the election, from the important players to the hot-button issues to the historical trends and political mechanics that affect the campaign. Starting today, I’m going to be sharing some of my favorite news links on this blog. I’ll try to post a few links every day. I’ll still be tweeting these articles, of course, but now you have another way of getting my political news recommendations. Here we go! In Arab Spring, Obama Finds a Sharp Test (by Helene Cooper and Robert F. Worth) Key passage: “In many ways, Mr. Obama’s remarks at the State Department two weeks ago — and the ones he will make before the General Assembly on Tuesday morning, when he addresses the anti-American protests — reflected hard lessons the president had learned over almost two years
Post a Comment
Read more
More posts