May 29, 2011
On Thursday, I’m off to Walt Disney World in Orlando, Florida for a weekend of Star Wars fun. The event is called, appropriately enough, “Star Wars Weekends,” and it features Star Wars activities, shows, events, and celebrities spread out around Disney’s Hollywood Studios. While I can’t wait to ride the new version of the Star Tours simulator adventure, Star Tours – The Adventures Continue, I’m equally excited to see some of my good friends for the first time in months. This will be my second vacation to Disney World, and to celebrate my return, I thought I’d share a funny story from the last time I was there. 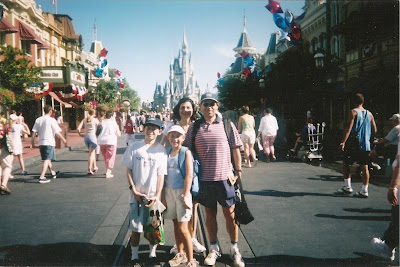 I don’t remember much about my first trip to Disney World, which happened in August 2004. Due to a freak accident with my camera’s SD card, I lost all my pictures from that trip before I could back them up. Thus, the only images that survive, such as the one above, are from my parents’ camera. I do know that I rode the original Star Tours simulator, mostly because I still have a souvenir passport from the ride. I also know that I went on a number of other rides and posed for pictures with Goofy, Donald, and other cartoon characters.But one of my favorite memories from my first trip to Disney World is when my sister and I got lost in the park for several hours.

My parents had agreed to let us walk around on our own for a while, but we were supposed to meet them at a predetermined point at a predetermined time. We wandered off, exploring the many captivating aspects of Disney World, and needless to say, we forgot about that predetermined meeting. When we didn’t arrive at the rendezvous point, my mother called the Disney World switchboard and explained that we were missing. The switchboard operator promised to connect her to the security office and then told her to “have a magical day.” (I’m not sure why they have to say that at the end of every single phone call, and I can imagine many scenarios in which it would be painfully inappropriate.)


In any event, my mother eventually spoke to the security staff and told them our names. We were still wandering around at this point, oblivious to our parents’ search for us and the fact that all of Disney World was on alert for two young children matching our description. Soon, we were approached by a park security officer, who asked us, “Are you Eric and Lisa Geller?” At the same moment, my sister said “No” and I said “Yes.” In my eagerness to comply with the park staff, I couldn’t understand why my sister would lie to a uniformed security officer. Later, she told me that she had been following our parents’ instructions to never give strangers our names because they might kidnap us. (I still don’t understand why they would need our names to kidnap us, but perhaps that’s a topic for another blog post.)

The security officer brought us to his office and called my parents. As they headed over to pick us up, the security officer, perhaps hoping to reassure my worried sister, gave us each a “Magical Moment” certificate to commemorate the event. 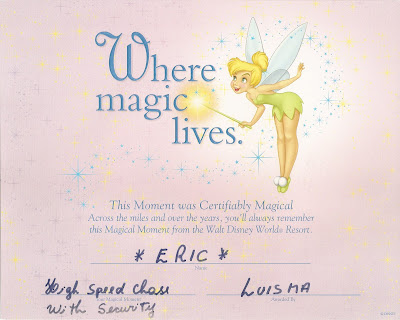