I don’t know about the rest of you, but I had a blast on New Year’s Eve.  I had the honor of hosting the ForceCast’s New Year’s Eve party, which was nothing short of awesome.  The event took place in the TFN live chat room, which has historically been a great place for all  manner of gatherings.  This was no exception.  Starting a little after 10pm ET, I, along with other East Coast participants, started my Special Edition DVD of Star Wars: A New Hope.  We watched the movie for the next hour and fifty-ish minutes, all the while chatting it up with fellow fans.  For those of us who timed it right, the Rebels blew up the Death Star at the stroke of midnight.

After the East Coast had their fun, the Central time zone was up next.  And the Force was with us last night – shortly after the East Coast got started, The ForceCast’s own Jimmy Mac joined us in the chat from Chicago.  We were joined soon thereafter by Jimmy’s son Michael and his wife Wendy.  I really enjoyed having Jimmy and his family there; it was nice to interact with him in a more informal context.  Jimmy’s son Michael had some witty remarks once the Central time zone began their viewing, and Jimmy also shared quotes and questions from his son Dylan about A New Hope.  Watching A New Hope on New Year’s Eve was originally a Mac family tradition, but Jimmy brought it to the greater ForceCast community last night.  It was so much fun sharing the tradition with him and his family.  Talk about a close community!

It really was exciting to have the most triumphant moment of this classic film coincide with the starting of a new year.  It was all the more exciting because I was able to share this moment with friends from around the country.

To end this blog post, here’s a picture from Twitter of the moment when 2010 began for me. 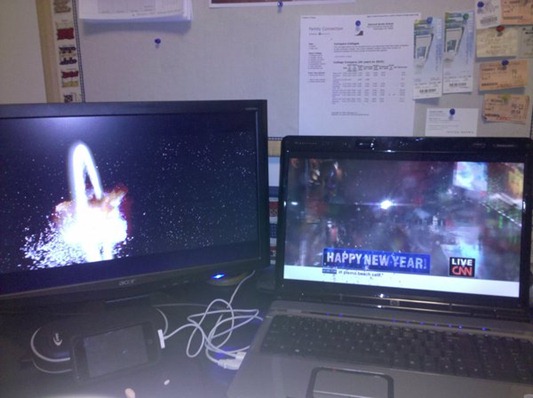