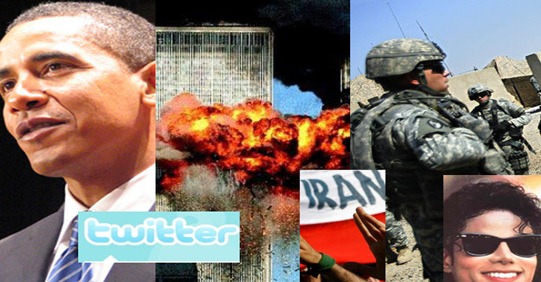 The first decade of the 21st century is almost over.

The years 2000-2009 were tremendously important in the course of history.  We saw so many milestones and so many setbacks.  We lived through so many celebrations and so many agonizing tragedies.  We laughed with the comedians and felt the pain of the displaced, the defeated, and the dead.  Historians look back at the end of every decade and proclaim its importance, but let’s face it, there are few decades in history that can compare to this one.

Before I get to some of the actual events that defined the 2000s, I’d like to analyze the trends we saw over the past ten years.

For one thing, decency seems to have fallen by the wayside.  From the Tea Party movement’s incredibly offensive signage to Joe Wilson’s Congressional accusation, we’ve seen political politeness thrown out the window in favor of partisan “You betcha” rebelliousness.  Politics has become increasingly divisive in America, and both sides are at fault.  In the past few weeks, as health care reform looms large in the minds of the American people, the attack ads running on TV, the words of those in Congress, and the posts of partisan bloggers have combined to engender an unnecessarily malicious atmosphere in our country.

On the positive side of things, technology has made incredible leaps forward in the past ten years.  Twitter, Google, YouTube, Facebook, and thousands of other sites we use every day were either founded or popularized during the first decade of the 21st century.  DVDs, solid-state drives, Bluetooth, wireless routers, and many other technologies that we now take for granted were unheard of before the dawn of the 21st century.  Technology has accelerated to the point where the average U.S. citizen wouldn’t be able to survive in a 1990s world – so many of us have become heavily reliant on our email-enabled cell phones, our GPS devices, and our high-capacity pocket digital camcorders.

Along with these groundbreaking new technologies comes the advent of citizen journalism.  As someone who wants to be a professional journalist, the rise of social media that has led to first-person reporting is fascinating to me.  If I see something happen on the street in front of me, I can inform the world with text, photos, video, and even a live stream with my cell phone.  With cheaper storage and faster Internet, people around the world have brought the news from the front lines to our computer screens.  Credibility remains an issue for the nay-sayers -- “Who will verify that this report is legitimate?” they ask.  In my opinion, credibility will sort itself out, just as we’ve learned which shopping websites to trust and which ones to avoid.  Citizen news streams will establish reputations, and we’ll see their valuable content become more publicized.

While those three trends were among the most important to me, numerous other trends helped define this past decade.  But since this is a personal blog, I’ve decided to stick with those three.  I’m sure you can get top 10 lists of topic-specific trends (“The 10 Biggest Developments in Cooking”, for example) if you do some Googling.
So as part of the worldwide remembrance of the 2000s, here, in no particular order, is my list of some of the top events from the past decade that shaped our planet.

November 4, 2008: Barack Obama becomes the first African-American president-elect of the United States
This is a no-brainer.  Never in history have circumstances shifted so dramatically in the course of a few decades.  In 1960, it would have been unheard of for a man like Barack Obama to become more than a Senator’s page, let alone a Senator, or the President of the United States.  No matter what you think of the man’s policies, you have to agree that the paradigm shift in race perspectives is impressive and encouraging.

September 11, 2001: In the deadliest terrorist attack on U.S. soil, al-Qaeda terrorists hijack planes and fly them into the World Trade Center.
Most people who were alive for the September 11 terrorist attacks will always remember where they were when they heard the news.  On that day, as went U.S. foreign policy, so went global politics.  The United States had been robbed of a certain imperviousness, and the American people were, for a brief period of time, united in anger and a need for vengeance.

August 29, 2005: Hurricane Katrina makes landfall in the United States and devastates much of the East Coast.
It may have destroyed much of FEMA’s credibility and cost over $80 billion, but Hurricane Katrina also highlighted the resilience of the people of New Orleans and sparked a nation-wide effort to repair the region.  This storm brought out the worst in Mother Nature, but it brought out the best in human nature.

March 20, 2003: Armed forces from the United States and allied nations launch the opening salvos of the war in Iraq.
Much of the criticism leveled at President Bush, and much of the heat that President Obama is getting right now, stems from the ill-fated decision to invade Iraq.  Ostensibly in search of nuclear weapons rumored to be in the possession of Saddam Hussein, the war has raged on for almost seven years and shows no sign of letting up.  The war has been both a boon and a bane for the United States.  On the one hand, national confidence in U.S. foreign policy has reached drastically low levels.  On the other hand, American citizens do seem to be much more sympathetic and helpful as it concerns the soldiers who protect their freedom.  The war in Iraq became the defining element of President Bush’s two terms in office.  One can only hope that it comes to a close before too long.

December 2007: The United States enters a large-scale recession that affects jobs, health care, and the approval ratings of a new President.
There’s no question about it: this recession has done more harm than perhaps any other event in the whole decade.  Job losses have been staggering, countless Americans have died due to unaffordable health care, and the overall state of affairs in the country has left some wondering if the United States is losing its dominance.  With the Christmas Eve passage of a massive health care bill in the Senate, Americans are gearing up for partial relief, but it is unclear when this recession will be fully abated.

October 23, 2001: Apple Computer unveils the first iPod, revolutionizing technology and launching a now-vibrant portable media industry.
With the launch of the iPod, the world of technology became a much more exciting place.  Apple’s portable media player would eventually spur new advances in portable video, cell phones, media purchasing, and even social media.  Steve Jobs’s flagship product paved the way for exciting developments in both portable media and portable gadgets in general.  One could argue that gadgets are more appealing to the general public today because of how appealing the iPod itself has become.


Thanks for reading my last blog post of 2009.  I hope you had a great year, and if not, hopefully 2010 helps turn things around for you.