Lots of Rest, Photos, and Fun 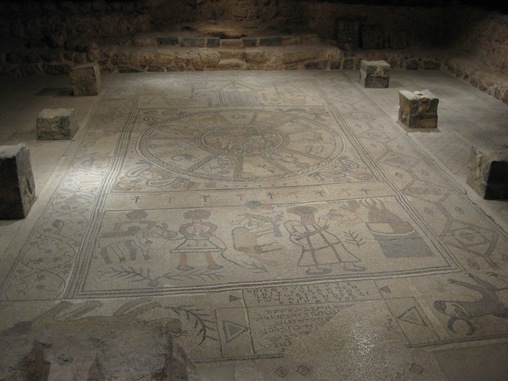 Since I last posted, I’ve recovered from my sickness and gone on two days’ worth of excursions.  Yesterday, we drove from our first hotel to our second, stopping at several places along the way.

Our first stop was a large mountain city where several chronological layers of archaeology were on display.  We saw ancient bathhouses, entrance gates, palace bedrooms, and even horse stables.  We walked down into a passageway that was used to ferry water into the city from the outside.  Our second stop was an old synagogue where the floor mosaic had been mostly preserved.  The chamber containing the mosaic included a video depicting the story of its creation.  The last stop before we reached our second hotel was a series of pools, where we relaxed for an hour before continuing on our journey.

When we reached the hotel, I was dismayed to discover that the Internet was only available for a high price.  An hour of Wi-Fi here is equivalent to five dollars.  How unbelievable is that?  I understand that this place prides itself on rural living, but charging for one’s connection to the outside world is ridiculous.  Anyway, I bought four hours.  That should last me until we leave tomorrow morning.

Today was our first full day at our second hotel, and we spent most of it out in the country.  Our first stop was an old Jewish city, where we toured two synagogues of contrasting Jewish sects.  We also bought a new menorah, for what I believe was too high a price. (But the merchant was very nice, so maybe it all balances out.)  Our second excursion today was a long Jeep tour of the Golan Heights.  We saw various fruits and vegetables, some of which our Jeep driver picked and gave to us.  We also drove past several bombed-out Syrian bunkers from “back in the day.”  After our jeep tour, we met up with our main Israel trip guide, and she took us to a hill overlooking Syria.  It was my first view of the country. (Historical note: even though the conflict is over, Syria is still officially at war with Israel.)

Right now, I’m sitting in the room writing this blog post with the Internet turned off (to save precious connection time).  The rest of my family is off on a kayaking/rafting trip—that’s not really my cup of tea, and there wasn’t an opportunity for photography, so I stayed behind.