College Tours, a Mini-Meetup, and More 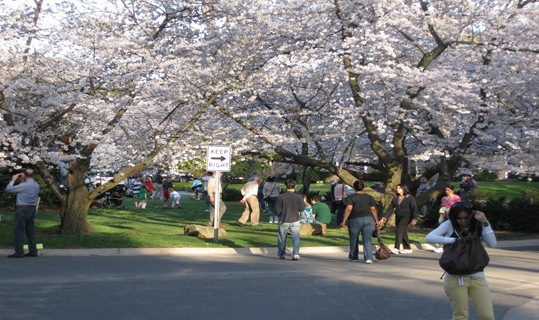 Spring Break is officially over tomorrow.  I had two weeks (plus an extra day) of relaxation and school-free activities.

Well, not entirely.  While I wasn’t attending classes, I did have to travel quite a bit over the course of four days in the first week of break.  The reason being that I needed to get a head start on college tours.  On the first trip, from March 31st to April 1st, I went with my dad to look at Wheaton and Connecticut College.  Both schools looked appealing to me, and the campus-wide Wi-Fi certainly didn’t hurt.  I made it a ritual to try a specific lunch item from both colleges: a turkey sandwich with lettuce and mayonnaise on wheat bread.  Both colleges passed the taste test.  We returned home Wednesday night just in time for me to catch the live Force-Cast taping.  Then on April 3rd and April 4th I went with my mom to visit Skidmore and Vassar.  Again, both college had the right “individual attention liberal arts” feel to them.  At Skidmore we went out to lunch in a nearby restaurant (a Circus-style cafe where popcorn was served before the meal in lieu of bread), and at Vassar I again had my signature college lunch item.

You may have noticed that there was a day for me to relax in between those two college trips.  April 2nd was not a college visit day, but it was still a busy one for sure.  In fact, I had been looking forward to it for the past week.  You see, Bethany Hamilton (known to Force-Cast listeners as the Jedi Princess of Jazz) was in D.C. that week to visit with her family.  Knowing that I lived there, she asked if I wanted to meet up with her.  I of course accepted.  We took the metro and met up near the Newseum, since that was the area of D.C. that I was most familiar with.  Bethany had never been to the Newseum, so I thought I’d give her a brief tour.  We checked out several of the exhibits and galleries, and she took some pictures.  After we left, we hit up Starbucks for a drink and a snack before walking back to the metro.  It was really great to meet up with a fellow Force-Cast listener and I’m glad that Bethany had a good time as well.

The second week of my Spring Break was much less eventful.  The cherry blossoms were out in full bloom, and there were tons of tourists walking around my neighborhood (we had the most cherry blossoms of any D.C. suburb).  We took Maddie on several walks where she was praised and complimented by numerous tourists.  On Tuesday I had a brief session with my math tutor, where we did a little bit of practice work for the AP Calculus exam I’ll be taking in May.  Wednesday saw a trip to the bank and to Petsmart to buy Maddie a new bone—after all, we had to keep her happy and occupied for Wednesday’s Passover Seder at our house.  That Seder, along with a second one on Thursday evening at my aunt and uncle’s house, was full of good food and great conversation.  I was able to have some of my favorite Jewish food--Gefilte fish and matzoh ball soup, to name two, and Maddie even made an appearance as Elijah the Prophet during the seder at our house.  Friday was a little less hectic—no new episode of The Clone Wars to look forward to at night.  We went to Staples to get some printer ink for my grandma, and I stayed in the nearby Petsmart with Maddie.  We brought Maddie along so she could visit Grandma, whom she hadn’t seen in a few weeks.  Maddie was able to run up and down Grandma’s apartment’s hallway, which tired her out and left her much more docile on the ride home.

As I’ve said before, tomorrow is the first day of school after Spring Break.  I’m that much closer to the end of the school year, and to the jam-packed summer ahead.