A Redesign, and Some Miscellanea 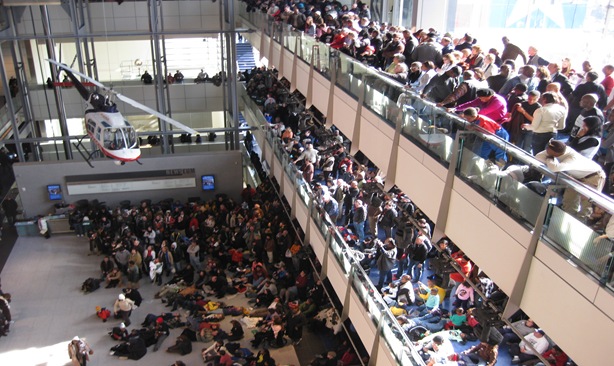 It’s been a while.  I feel like I always start my blog posts like that.  Let’s start with the basics.  Hopefully by now you’ve noticed that I also redesigned my blog.  It now fits in with the style of my website.

Inauguration Day went really well.  I woke up at 4:00am, was out the door by 4:30am, and had arrived at my metro by 4:40am.  I caught the first train out of the station and made it to the destination metro at 5:00am.  Already ahead of schedule, I was feeling very good about the “day” so far.  But then I ran into a problem.  Police had blocked off a street and made it impossible to get any closer to the mall – and to the Newseum.  After about 20 minutes of waiting around doing nothing, some people broke through the strip of tape that was holding us back, and we sort of meandered through the street toward our destinations.

I then hit another delay when I reached the ticketing station – which hadn’t opened yet, and was serving as a final barricade.  Since I didn’t have a ticket, I figured that this wasn’t where I was supposed to be any way.  I took a few side streets and finally go to the street that led toward the Newseum.  I saw some police up ahead and figured they would just tell me to go back to the ticketing station.  But when I started to pass them, they just asked for my Newseum Press Pass, which I showed them, and then let me go on my way.

I finally reached the Newseum and got in the members-only line.  By then it was 5:30am.  I spent the next four hours standing around talking to my line-mates, alternating between snapping photos of celebrities entering through the VIP door and doing little jigs in my spot to keep warm.  When they finally let us in at around 10am, I couldn’t have been more anxious to step inside and get warm.  After passing through a metal detector, we were admitted into the general building.  I walked around for a bit, trying to figure out where I would get the best view of both the gigantic screen suspended above the atrium floor and the parade route outside the giant windows.

After finding a spot and sitting down for a few minutes, I noticed a news camera up in the corner of the building.  I decided to see if I could get some photos of more famous people.  To my surprise, the camera turned out to be part of a CNN set that was home to a panel of several of their “Best Political Team on Television.”  In other words, some of the coolest people in TV news.  I was standing about five feet away from Campbell Brown!  I got an in-person look at John King doing his thing with the magic board!  I was even on TV for a brief moment.  It was really exciting.

Me on CNN from Eric Geller on Vimeo.

Afterward, I settled down to watch Obama’s swearing-in, which was very exciting.  Everyone around me booed and cheered at all the right moments; it was like watching a sports game.  When the ceremonies were over, I stuck around to watch the beginning of the parade.  I then headed back home via metro, but not before being delayed temporarily by a huge flood of people trying to get on said metro.  Overall, however, Inauguration Day was a huge success.

I’ve been driving a little bit more since I last posted.  Just basic trips, but it will help me reach my goal of 60 hours.  I know I won’t get there before my permit expires, but at least the hours transfer over to my new permit once I renew it.  Also on the car front, we are now looking for a new minivan for my mom.  Our third car, which my housekeeper uses to do errands and such, was involved in a minor accident that nevertheless damaged the car beyond our desire to repair it.  So my mom’s minivan is now our housekeeper’s car.  This is good, because we’ve been looking forward to get a new, modern, technologically-decked-out car for a while.  It’s between a Honda Odyssey and a Toyota Sienna, although the Odyssey is winning.

In more recent news, I saw the film Fanboys last night.  In case you’ve been living under a rock for quite some time, you know that the movie is a tribute to Star Wars fans, by Star Wars fans.  It’s about a group of friends who break into Skywalker Ranch, George Lucas’s headquarters, to steal a copy of the upcoming SW movie The Phantom Menace so their friend (who has cancer) can see it before he dies.  At the theater, I met up with The Force-Cast’s Jay Shepard, and we talked for a while.  It was great to meet him in person again.  As for the movie…well, I’m not very good at long reviews, but I’ll just say that it was amazing.  Very funny, yet very deep.  It had all the right references to Star Wars and all the right bashing of Star Trek.  The characters were very believable and you could see how each one thought and what motivated them.  I recommend this movie for anyone who wants a good laugh, but especially Star Wars fans.

That’s all I can think of in terms of life updates.  School is going well and I look forward to spring break in a couple of weeks.  Who knows, maybe I’ll even update this blog before then?