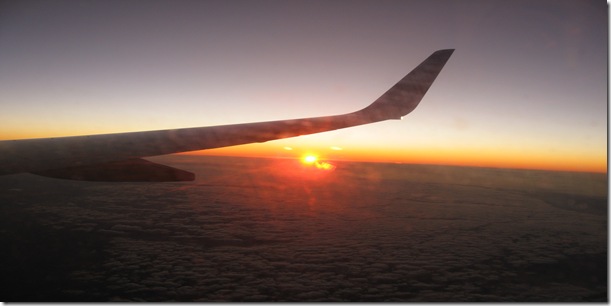 It seems that drafting blog entries from thousands of feet above the ground is becoming a habit for me.  As I write this, I’m on a plane to Fort Myers, Florida, on the first part of a vacation to Captiva Island.  I would, under normal circumstances, have been able to publish this post immediately – I started writing at about 5:10 PM – instead of drafting it on a plane and saving it for later.  But unfortunately, our flight was delayed several (four) hours because of icy conditions in the plane’s originating city of New York.  Instead of a 11:15 AM takeoff and a 2:00 PM landing, it was a 3:30 PM takeoff and a landing time that, as of press time, is not yet known.  But we’re looking at about 5:40 PM.

Florida doesn’t mean relatives or a particularly exhilarating excursion for me.  It means relaxation and a well-deserved break from classes.  We finally have an Airport Express for a travel router, which means getting online in the hotel room is going to be a whole lot easier.  And going to the beach and/or pool every day is certainly more enjoyable than sitting in a double block of Physics.

I’m only on break for about two weeks, and Florida will occupy the first of the two weeks.  The second week will encompass New Year’s Eve and a little bit of homework that I need to finish for Monday, January 5, the first day of classes in 2009.  I’ll also be drafting some letters to major news networks with bureaus in the area, asking if they have volunteer internship opportunities for Summer 2009.  Last summer I took a journalism class at American University and worked a paying job as a tech assistant at my school.  This summer I will again work at my school, but instead of learning about journalism, I want to watch journalism as it happens.  With this in mind, I will be begging asking CNN, NBC, etc. for the opportunity to work at their studios.

(Aside: the flight attendants just announced preparations for descent.  I will probably be shutting down soon.)

I finally got my PSAT scores back.  I was very surprised and pleased to learn that I had scored in the 99th percentile nationwide.  My math score, as expected, was the lowest out of all three sections, but – if I can toot my own horn here – there were lots of flying colors involved in my overall success.  For some reason, I did not qualify for National Merit – as a small asterisk next to my Score Index irritatingly informed me.  But I’m content with simply bringing up my math score and achieving similar success on the actual SAT in the Spring.

While on the subject of things I didn’t relish that turned out well, I should mention my History class book report.  Among the books to choose from was Barack Obama’s Dreams from My Father.  I always felt that I should have read his books, especially as a true Obama supporter who saw his policies as evident of a necessary change for U.S. politics.  But I had not picked one up yet.  So I chose this book.  I started it today when the plane was delayed and am on page 120-something right now.  I am really enjoying it.  I plan on picking up his other book when I finish this one.  Obama should write a book while in the Oval Office; maybe something of a journal.  I’d read it.

And as a final note, let me just say to Southwest and United: I don’t care how friendly your skies are, I just want some in-flight Internet!