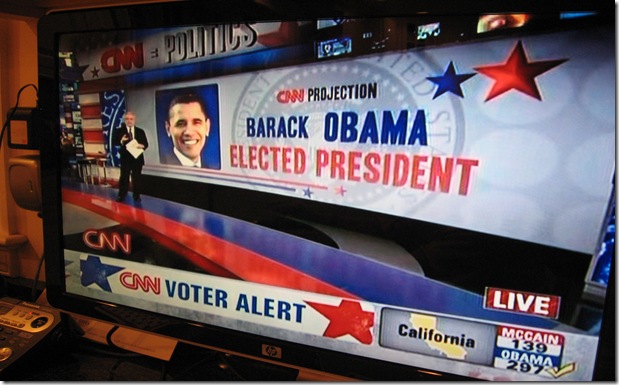 Mission accomplished.  And we mean it this time.  On November 4, we elected Barack Obama to be the next President of the United States.  I am disappointed, however, that Inaugural tickets seem to be gone already.  Although really, what did I expect?  This is an historic election, and attendees of the January Inaugural will be able to tell their grandchildren years from now that they witnessed history.  Segueing to our Election Night party for a moment, I can safely say that it was the best (and really, the only) Election Night party I can remember.  We had a great turnout of guests, good food (though towards the end of the party, nothing was eaten due to a hyper-tense excitement in the air), and about ten TVs all going at once.  CNN’s hologram technology was great, too, even if people downplayed its significance and value.  But most of all, I’ll always remember where I was at 11:00PM on November 4, 2008.  Where was I?  Taking the above picture, of course.

The weekend after the election was over, we went to the Newseum.  We did not go specifically because of the election, but we did find several election items present.  There was a Barack Obama standee with which I have photos.  The gigantic screen in the entrance gallery of the Newseum also displayed election night recaps and Obama’s victory speech.  And there was a special front page gallery in the entrance area that displayed all fifty states’ front pages from November 5.  We didn’t get to see nearly all the Newseum exhibits in our short four-hour visit, but we did see some great ones.  We stopped by the Internet, TV, and Radio gallery (probably the most interesting for me); we checked out the 9/11 Gallery and watched a ten-minute mini-doc about the news coverage of the tragedy; we toured one of the Newseum’s broadcast studios and I learned about how TV equipment works on air; and we visited the Interactive Newsroom, where we played the Ethics Center game and stepped in front of the cameras for some fake newscasts (videos might be on the way).  All in all, I can safely say it is the best museum I’ve ever visited.

And now for some sad news.  The Thursday before last, my laptop’s LCD screen broke.  There was no crack, but turning on the machine produced some strange imagery.  I suspected, after conferring with a friend at school, that there was a cable loose in the laptop’s hinge.  So I did a quick search for good places to take it for repair.  I had initially planned to leave it with Best Buy’s Geek Squad, but my friend spoke so unfavorably of the service that I decided to forgo that option.  After a little research, I decided I would take it to Staples’s EasyTech service.  They said they would have it for me by this coming Monday or Tuesday.  That’s good news, as HP’s direct repair service would have taken 2-3 weeks.  Here’s hoping they managed to fix the problem.  Since the problem arose, I’ve been using (and am currently using) my video-editing desktop computer for primary computing purposes, but I long for the portability and familiarity of my laptop.

Thanksgiving is coming up, and I am excited.  We aren’t going anywhere for the holiday, but I’m always a sucker for turkey, gravy, and pumpkin pie.  In fact, food-wise I would say Thanksgiving is my favorite holiday.  We’ll be having a few family members over for dinner, but otherwise nothing special.

On an unrelated note, I have been surprised at the lack of snow in the past few days.  I know the season has barely just begun, but as a student I’m always looking forward to opportunities to stay home—and, of course, to catch up on work…yeah…