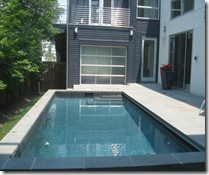 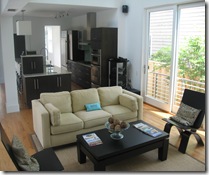 Today we head home after almost a week in Rehoboth.  We saw some really great houses and some not-so-great houses.  There was one house that we didn't get to see, but from the Internet it looked pretty good.  And it didn't hurt that Tony Kornheiser, a famous sportswriter, lived on the same street.

My sister and I are really set on one particular house (pictured above), but my parents find it too modern, too expensive, and full of too many staircases.  They're worried about our dog and how she'll navigate the house.  I'm not worried; Maddie's a smart and resourceful dog.  The house is sold furnished, and that was part of what sealed the deal for me.  The furnishings include an HDTV in nearly every bedroom (of which there are six!); a Blu-Ray player hooked up to a ridiculously large home theater system; a wall panel in almost every room with controls for iPod and radio playback; a gigantic shower with an outside entrance; and a heated pool with miniature fountains.

Some of the other houses we saw were very beach-y but too small.  My mom liked the look of several that almost made me gag.  They were simply too cramped!  And some of the furnishings made them look like camping cabins: old wood floors, ugly rugs and carpets, old TVs, faded paintings, need I say more?

My mom is worried that buying the modern house would put an end to her dream of getting beach-y signs like "This way to the beach" or "The Gellers' beach house".  I still think we could make it work.  Then there's the fact that it's the only modern house on its street.  But from the conversation they had with Rehoboth residents, my parents didn't get the impression that people really disliked the house.  The construction process, according to the residents, was unbearably long, but there isn't any real disapproval of the house's modernity.

But there's really no sense in worrying about beach houses right now.  Even though my mom said we'll probably have a house by this time next year, nothing is final, and nothing is guaranteed.  Besides, we're thinking about getting a pool in our backyard at home.  That seems to be higher priority for my parents -- rightfully so -- which means our potential beach house must take a temporary back seat.